Patricia Field On Styling Sex And The City

In the opening credits of Sex and the City, Carrie Bradshaw struts down a busy Manhattan street, eyebrow cocked, wearing a blush pink bodysuit and fluffy tulle ballerina skirt before being sprayed with gutter water from a passing bus. That outfit – unexpected, whimsical, feminine and cool – has come to represent the entire show. 20 years after its debut, we still look to the series as a defining cultural moment, one that carried us from one century to the next. In addition to dealing with the gender dynamics and sexual politics of a new millennium, it also presented the modern woman in her many guises: smart, emotional, complex, warm, strong and – perhaps most of all – stylish. 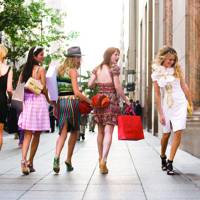 The woman behind the show’s look (including Bradshaw’s and her three best friends’ – Miranda Hobbes, Samantha Jones and Charlotte York) is Patricia Field. She took the classic New York cliché – four women striving for success, love and a few cocktails along the way – and manifested it in Manolo Blahnik heels and Fendi baguettes. In doing so, she crafted a look that defined a generation.

“I can’t believe it,” Field tells Vogue of the show’s enduring influence on the series’ 20th anniversary. “I really can’t. You can never predict anything like this, whether you have some major success on your hands [or not]. It became what it was, it was what it became.”

Carrie Bradshaw’s identity wasn’t always as clear as it is now. Field recalls the early days: “The girls were described to me and it was interesting because the only one who wasn’t communicated clearly to me was Carrie,” she explains. “She was the one who sort of developed over time. The other three you could describe and an image was conjured, but Carrie evolved, working together with Sarah Jessica Parker.”

The process, she says in her signature New York-accented rasp, was a highly collaborative one. “Otherwise it doesn’t have real substance. It doesn’t have believability,” she explains. “You prepare for an episode with a few racks of possible clothes for different scenes. You schedule a fitting and you go through the script with the actor; they have certain needs, certain feelings. It’s not like cutting out a paper doll.”

There’s method – and meaning – to the madness, too. Take, for example, the famous Carrie necklace. Beyond becoming a signature of Bradshaw’s (and playing a crucial role in the series’ finale), the small charm spoke about her place in New York City. “It was a piece of New York, not just Manhattan,” Field told the Television Academy Museum. “New York was my palette, but I never really made a conscious connection between the city and the wardrobe as such,” she says, alluding to the statement that many fans have made about the city being the unsung fifth character holding the show together. “It was more about, ‘Oh this looks good, this looks like the character.’ I didn’t try to expand it.”

Her other favourite Carrie moments? The “J’adore Dior” T-shirt paired with a long taffeta skirt from the second film, and the dramatic Versace gown she wore in the TV series’ last episode rank high for Field. “The [Versace] dress really amped up the emotion of that scene,” she told Man Repeller. Getting designer clothes started getting much easier at the beginning of season two, Field recounts. “The show exploded then and a lot of designers wanted to be on it.” Costume design, she adds, “isn’t about selling clothes, it’s about telling a story. That’s something I learned along the way.”

When she came to be the SATC costume designer, Field had already spent decades dressing people in her boutique, a retail space where art, culture and fashion collided. She closed her store in 2016 and then opened Patricia Field ArtFashion on the Lower East Side, a new concept store brimming with one-of-a-kind garments and accessories, many of which are made by artists and designers who happen to be her friends. “I have always been drawn to people who are artistic because they’re more interesting to be around,” she explains. “It’s just woven into my business.”

Field continues her costume design work on the hit show Younger and is also busy supporting former SATC colleague Cynthia Nixon, who is running for New York governor. Just last night she was at a fundraiser for Nixon showing her support. And don’t expect her to slow down any time soon. “I’m a workhorse, I’m a Clydesdale. That’s how I grew up and that’s how I’m happy. I don’t want to sit around and watch the clouds go by.”