The event grows in popularity each year, and this year’s race day saw a large number of families turn out on Father’s Day to take part.

The 5K race and two-lap 10K took runners on a picturesque route of the tree-lined boulevards of Port Sunlight Village – with places for both races selling out with two weeks to go.

Following the 5K and 10K races, almost 300 youngsters took part in their very own 1K Fun Run. They received a finishers’ medal and goody bag.

Unilever – which was originally founded in Port Sunlight as Lever Brothers in 1888 – supported the race day for a fourth consecutive year.

Despite soaring temperatures, competition remained fierce and excellent times were recorded – including a new female 5K course record which was set by Helen Sahgal representing Liverpool Pembroke & Sefton Harriers. Helen clocked a time of 18 minutes 25 seconds – knocking 32 seconds off the previous record of 18:57 set by Megan Ball in 2015. She also came second in the BTR Port Sunlight 10K last year.

A group of 115 runners took on an extra challenge, running in both 5K and 10K races. A small group first did the combined 15K three years ago, this has grown year on year with the number almost doubling in size annually.

In addition to their 5K and 10K finishers’ medals, the double runners also received two race T-shirts and goody bags, as well as special 15K T-shirt for their extra efforts. Plans are already underway to further increase the size of the group running both races to 200 for 2018.

The winner of the 5K was Joseph Boden from Wallasey AC with a time of 16:12, narrowly missing out on setting a new record by just two seconds. He was followed by Paul Wathan from Eryri Harriers in second place with a time of 16:30; and in third place was Chris Yorke from North Wales Road Runners clocking a finishing time of 17:28.

Lee Jones from Deeside AAC took the top honours in the 10K race with a winning time of 34:27; Paul Wathan from Eryri Harriers running in both races again took second place with a time of 35:18; and third place finisher was John Cain from Liverpool Harriers in a time of 36:25.

Taking the female honours in the 10K was Carmel Triggs who clocked a time of 39:21; Rachel Jacks from Southport Waterloo AC took second place with a time of 40:32; followed again by double racer Gemma Morgans from Eryri Harriers who took another top three finishing place in 41:35 making her third.

The event proved such a success that after officially starting the races and presenting winners’ prizes and trophies, Head of Unilever Port Sunlight Cameron Jones and Paul Harris, CEO of Port Sunlight Village Trust, got into the spirit of the day and vowed to take part in the 5K race at next year’s event.

The Trust invests nearly £3million each year in building maintenance and repair, heritage conservation, and lifelong learning programmes for residents, the local community, and domestic and international visitors.

“What a fantastic day. Port Sunlight Village is the perfect setting to host a running event – and what a wonderful day for everyone involved. The village green was a hub of activity as we welcomed runners, their families and spectators.

“It was brilliant to see runners cross the finish line with big smiles on their faces, despite the very hot weather. I’m already looking forward to taking part next year.”

The field of runners also included a team of 85 runners representing sponsors Unilever – 30 of whom have successfully completed the Couch To 5K running training programme preparing using lunch breaks and after work training runs.

Unilever’s sponsorship is part of its brightFuture campaign. One of the company’s goals is to help a billion people around the world improve their health and well-being by 2020.

Unilever is extremely proud of its history and heritage in Port Sunlight, where company founder William Lever built his factory and village in 1888. The company continues to have world class manufacturing, R&D and IT facilities based here, along with a third of its UK workforce. Unilever’s brands include household names Persil, Dove, Tresemme, Radox, Comfort and Surf. 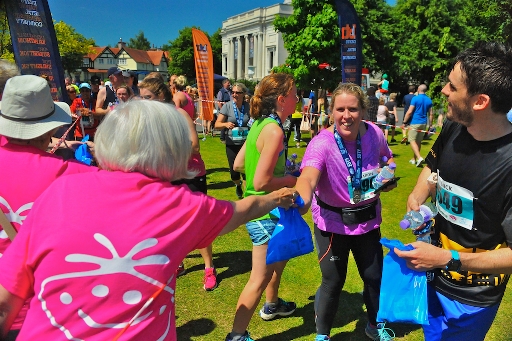 “Congratulations to everyone who took part in the 5K and 10K – and not forgetting the superfast 1K fun run youngsters. Unilever is delighted to sponsor this established event, supporting the community to encourage people of all running abilities to improve their health and wellbeing in a special historical setting. I can’t wait to join the runners on the start line in 2018.”

“A new race record set, glorious sunshine and a fantastic turn-out – all important factors which go a very long way to make race day a huge success. On behalf of BTR and the Merseyside running community, we’d like to thank Unilever, Port Sunlight Village Trust and its residents for welcoming the participants and spectators.

“Conditions were extremely tough so a huge well done to everyone for giving their all – especially those runners taking on the double race 15K challenge.”

The date for next year’s BTR Port Sunlight Village Road Race is confirmed as Sunday, 17 June, 2018. Entries will open later this week.

Next in the BTR portfolio is the sold out Tour Of Merseyside – six races over seven days covering 52 miles from Sunday 2 July to Saturday 8 July 2017.